Currency Converter
The Top Coins > Blog > Cryptocurrencies > Ethereum > Ethereum Price Prediction: What Will ETH Be Worth in 2021?

To understand the Ethereum price prediction for 2021, we should start in the future changes in the mining network of ETH.

Ethereum was threading at the bottom of the graphs all year––until the bull run led by the Bitcoin evolution provided a springboard for ETH prices to soar. Within three months, ETH rose from $357 to $724, nearly doubling its value. And at the height of the first quarter of 2021, the coin broke through an all-time high of $1,958.

Announcements of the network’s migration to Ethereum 2.0, which promises to solve its scalability issue, provided the leverage ETH needed to successfully rally its way to the 2021 bear market. But now that the initial wave of investor interest has died down, the coin is back to a downward slope––a critical period that could make or break its end-of-year value.

Analysts are now challenging Ethereum’s growth. How high can the price of Ethereum go? And does the Ethereum price prediction 2021 signal a bright future for the coin?

What is the Ethereum 2.0 Migration?

Ethereum 2.0 is a multi-step network migration process, with its core being a transition to a new mining algorithm. Moving to the Proof-of-Stake consensus mechanism will fundamentally change the mining industry of Ethereum.

It's bad news for some miners because the old Proof-of-Work algorithm will disappear over time––negating the point of expensive GPU investments. However, the good news is that the transition is unlikely to complete in the next year.

Founder and creator of Ethereum, Vitalik Buterin, said that he was looking forward to big and rapid improvements in the blockchain technology upon transitioning to 2.0. However, he also reminded everyone that the change of protocol in mining is going to take longer. Therefore, classic miners will still have time to adjust. The initial stages of their Ethereum 2.0 launch are only algorithm tests. All economic activities will still occur in the current network, which won't happen without the miners.

When Ethereum's demand is increasing, largely due to the DeFi projects, Ethereum mining has the highest profitability. It’s evident through the Ethereum hash rate, which is now close to its all-time high on the chart, and it could set new records if the price of cryptocurrency rises even higher.

Miner communities are confident to work on the Ethereum network for at least another year or more. They're predicting that once the economic activity is transferred to the PoS algorithm, the market for used video cards will have an unprecedented "sale." Still, many are determined to stay in business by switching to other PoW minefields, such as Bitcoin. Ethereum has acknowledged that many would prefer to stay in the current version of the network and has announced that they are preparing a bridgehead to meet this demand.

Some experts are speculating that Ethereum Classic will remain on the Proof-of-Work algorithm. Recently, Ethereum Classic has updated the blockchain for compatibility with the current version of Ethereum.

Will Ethereum Go Up?

For the Ethereum future to be set in stone, it needs to fight against its current downward trend. While the token is threading through difficult waves, a breakthrough past its almost-$2,000 all-time high is possible once the Ethereum 2.0 migration gains more traction. 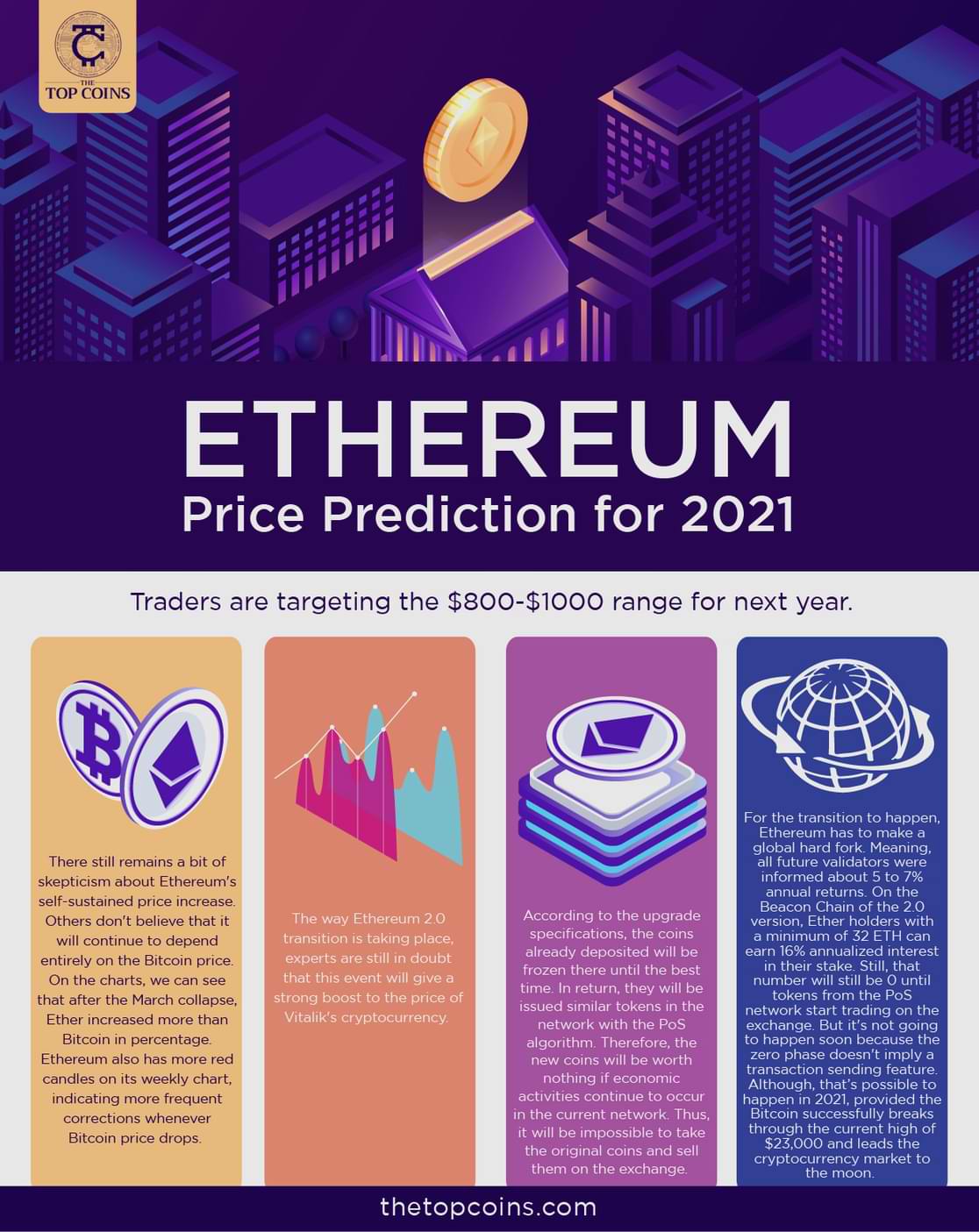 There still remains a bit of skepticism about Ethereum's self-sustained price increase. Others don't believe that it will continue to depend entirely on the Bitcoin price. On the charts, we can see that after the March collapse, Ether increased more than Bitcoin in percentage. Ethereum also has more red candles on its weekly chart, indicating more frequent corrections whenever the Bitcoin price drops.

About how high will Ethereum go––that value is strongly attached to how the Ethereum 2.0 update performs over the next few years. Hopeful investors are looking at an Ethereum price target of over $10,000, but that breakthrough isn’t a possibility within 2021, given how the network is currently standing on shaky ground. For now, analysts are closely watching the transition, which will make or break Ether’s future.

But with the way the Ethereum 2.0 transition is taking place, experts are still in doubt that this event will give a strong boost to the price of Vitalik's cryptocurrency.

Ethereum 2.0 required a substantial stake from its investors to successfully begin the migration. According to the upgrade specifications, the coins already deposited will be frozen there until the best time. In return, investors will be issued similar tokens in the network with the PoS algorithm. Therefore, the new coins will be worth nothing if economic activities continue to occur in the current network. Thus, it will be impossible to take the original coins and sell them on the exchange.

For the transition to happen, Ethereum has to make a global hard fork. This means that all future validators are informed about 5 to 7% annual returns. On the Beacon Chain of the 2.0 version, Ether holders with a minimum of 32 ETH can earn 16% annualized interest in their stake. Still, that number will be 0 until tokens from the PoS network start trading on the exchange. But it's not going to happen soon because the zero phase doesn't imply a transaction sending feature.

However, it’s not a far reach to assume that it can occur in 2021, provided that Bitcoin successfully breaks through the current high of $23,000 and leads the cryptocurrency market to the moon. 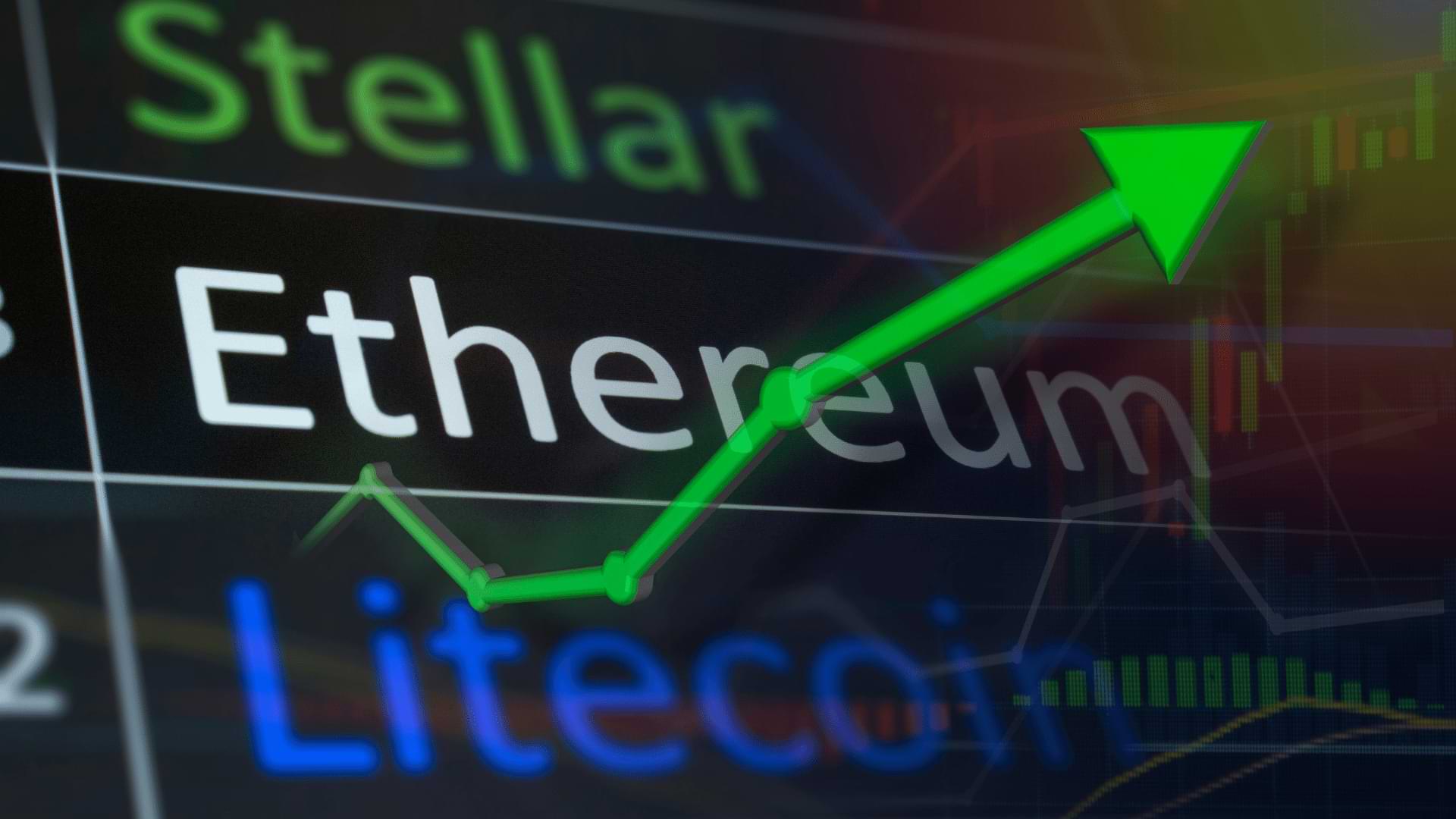 How will Ethereum adopt the PoS algorithm? How does the adoption process affect Ethereum price prediction in the coming months?

At Phase Zero, the system will have an initial test. Validators will be launched, and the staking management tool will be implemented, reinforcing a stricter fine system for miners. Ethereum staking will look nothing like it was before. You have to run the nodes. Offline validators will gain no reward and be penalized. If validators deliberately or accidentally attempt to damage the network, they can be fined. In other words, they can just burn a part of your Ethereum through staking.

At Phase One, they will start to include sharding. There'll be 64 shards, so the Ethereum 2.0 blockchain will have 65 subnets -- along with the Beacon Chain, which will be the link between all the shards. There will also be another test phase during which economic activity won't take place. All transactions with real money will still occur in the current version of the network with classic mining.

Phase Two implies a transition to a new model. With operating validators and shards in the Ethereum 2.0 network, the Ethereum virtual machine will be launched, and applications and smart contracts will be transferred to it. It's not yet clear how it will be done; even the documentation is still under development. However, the developers hinted that the merger of the new Ethereum blockchains would begin during this phase. Therefore, mining with the PoS algorithm will be the priority, significantly reducing the reward for classical mining next year.

At best, it will take at least two to three years for the developers to complete all three stages.

Ethereum has massive potential to grow in 2021, but the upper limit of its potential is heavily reliant on Ethereum 2.0’s success. For now, ETH is gaining leverage through Bitcoin’s bear market. Once the latter stagnates, it will be difficult for Ether to raise itself to higher grounds. While Phase 0 has, so far, been a success, only time will tell how the rest of the update will go. For now, investors are playing their cards: to HODL or to invest.

Cryptocurrency Mining Vs. Staking: Which One To Choose?
19 Jul 2021