Ethereum is on a roll, and according to Mark Cuban, it will eventually “dwarf Bitcoin.” Cuban expressed his enthusiasm for the open-source blockchain in a podcast interview with journalist Laura Shin on April 6, 2021.

According to Cuban, Bitcoin has evolved to be more of a store of value instead of an actual currency. Ethereum and its capability to be a platform for a wide variety of applications will prove to be more valuable in the long run, especially considering the much-awaited Ethereum 2.0 upgrade which aims to transition the platform to a more scalable and eco-friendly Proof-of-Stake consensus mechanism.

This is a stark difference from Cuban’s statement back in 2019 when he said that he’d rather have “bananas over Bitcoin”, and that “crypto is so complicated for 99% of the population.” Now, Cuban is all-in on cryptocurrencies, even selling a tokenised version of this tweet for $952.94: 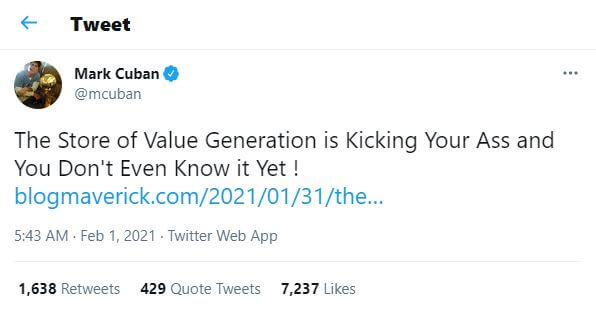 Store of Value vs. Utility

“Bitcoin right now has really evolved to be primarily a store of value, and it's very difficult to use it for anything else. It's become digital gold. You can use it as a platform that enables other things, but it requires a whole lot more,” according to Cuban. “It requires doing a variety of other things. It acts more like a collateral than anything else in order for it to gain utility.”

Regarding his disparaging statements about Bitcoin in 2019, Cuban explained that while he’s always been positive about blockchain technology, he never saw Bitcoin as anything more than a store of value. He cites Bitcoin’s inability to handle transactions to be one of the major hurdles to widespread adoption, plus the fact that “it wasn't very simple for grandma to come in or grandpa to come in and use [Bitcoin] easily.”

In 2017, he had the chance to test whether his thesis (namely, that Bitcoin is not a usable currency but a store of value) held water. He set up a Bitcoin payment gateway for Dallas Mavericks merchandise and tickets, even offering discounts for those paying with Bitcoin.

“Nobody did. It was an experiment to see if I was wrong, and as it turns out, you know, Bitcoin really is not designed to be a currency.”

“With proof-of-stake, you’re going to be able to have, some multiple, a significantly higher multiple, in transactions per second, that’s going to improve the utilization and the opportunities to create on ethereum,” says Cuban, “in a few years, I think ethereum and maybe two or three other blockchains will have their place, and those will be the winners.”

Ethereum is an open source platform released in 2015. Ethereum’s goal has always been to provide a platform for innovative decentralised applications that can disrupt and transform a wide variety of industries. This is precisely why Cuban believes in Ethereum’s value more than Bitcoin’s.

The Future of Finance

Cuban believes that DeFi is the future. This future, however, hinges on partnering with centralised banks.

“It really depends on how nimble and agile the incumbents are, the legacy banks are. I mean, they're not stupid, right, but they do have a vested interest in keeping things the same way. And again, it's gonna come down to who people trust. People in the crypto community don't trust banks at all, but the other 95% of the country, in the US, at least, they do trust banks,” he continued, “I think partnering with a bank, to teach them DeFi, is going to be what happens quite a bit.”

The permissioned design of certain cryptocurrencies such as Ripple (XRP) is particularly attractive to centralised banks. The Bank of France, for instance, has expressed interest in using the Ripple Payment Protocol in implementing their own central bank digital currency (CBDC).

Cuban believes in the future of Ethereum as a platform. He believes in the capability of smart contracts to disrupt and modernise a lot of industries -- anything documentation-driven and can be boiled down to “if this, then that” can be transformed into a smart contract. Cuban recently made a huge investment on Mintable, an NFT marketplace.

Cuban’s value-based investment style is not, by all means, original. Bitcoin’s value beyond being a store of value has been a topic of rumination for a long time. While a lot of high-profile individuals are openly lauding the value of Bitcoin as a profitable investment, people are also waking up to the actual cost of Bitcoin mining, namely, its environmental cost: 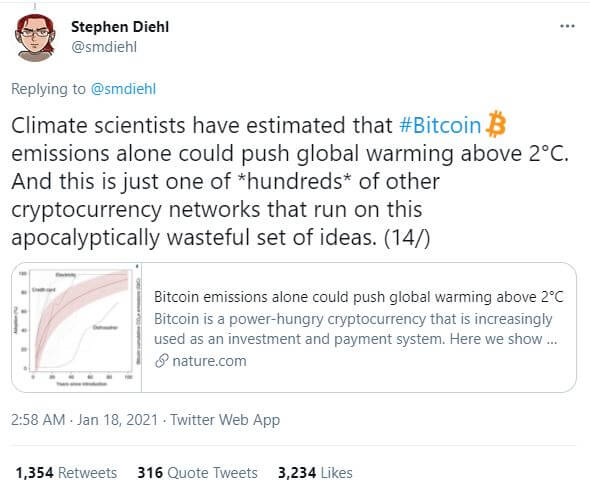 Considering the fact that Bitcoin has no particular purpose other than to be a store of value, the reality of its impact starts to become more undeniable. Is the profit really worth the irreparable damage to the environment?

That is the problem that altcoins seek to solve. There are hundreds of new cryptocurrencies released into the market on the daily: from ones that solve problems of interoperability, to ones that seek to create a global web of data through the internet of things, every cryptocurrency promises a version of the future. As more and more investors get into the crypto space, they are essentially voting for the version of the future that they believe in.

Cuban has an interesting point of view when it comes to investing, one that is mirrored by a lot of cryptocurrency enthusiasts that support the recent waves of innovative, new altcoins.

One such innovative coin is The People’s Reserve, a coin whose price is pegged to the last highest price of gold, and compounds at a rate of 12% per annum, with the goal of bringing the power of compounding interest back to the people.