Currency Converter
The Top Coins > Blog > Cryptocurrency Education > Litecoin vs Ripple: Can They Be In Competition With Each Other 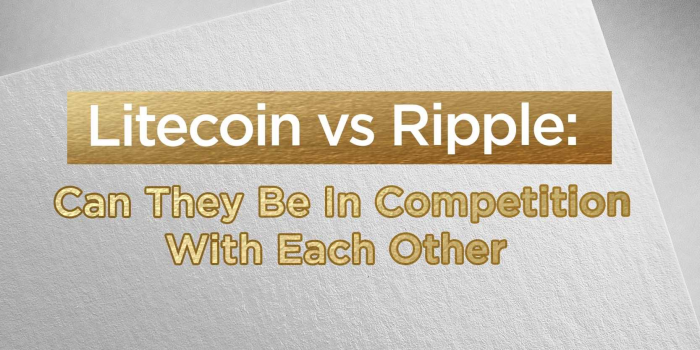 Litecoin vs Ripple: Can They Be In Competition With Each Other

It’s been almost a decade since the creation of Litecoin and Ripple. The two cryptocurrencies use similar blockchain technology but differ in purpose and algorithm network principle. The Litecoin (LTC) currency goes with the flow like most Bitcoin followers using decentralized peer-to-peer transactions. On the other hand, Ripple used centralized blockchain technology for faster transaction speed.

The main differences between Litecoin and XRP are as follows:

When it comes to transaction speed comparing Litecoin to Bitcoin, the latter will get far behind. However, when talking about Litecoin vs Ripple, it will be another story to tell. Ripple was built for speed and specializes in cross-border transactions that are mainly used by large organizations or companies. The XRP blockchain can achieve around 4 seconds per transaction, while it can take LTC slower at around 2.5 minutes per transaction.

Both cryptos use strong blockchain security, the Litecoin (LTC) currency blockchain uses Scrypt hashing algorithm while XRP uses RPCA (Ripple Protocol Consensus Algorithm). The Scrypt algorithm has some advantages to make it harder for large-scale custom hardware attacks since it will need a larger memory. While the RPCA has a tight security protocol by updating nodes every few seconds in order to maintain the correctness and agreement of its network.

When it comes to mining crypto, you can’t deny the fact that Litecoin will have an advantage over Ripple (XRP) crypto. Since the XRP blockchain is a centralized system, no mining is allowed to be performed. Meaning, XRP is controlled by individuals who decide where and when to produce a Ripple supply. And, as of this moment, there’s currently around 100 billion Ripple supply that is reserved and circulating in the market.

Just like a common fiat currency that is produced and controlled by the government. An individual owner of Ripple can take advantage of some of its perks like fast transaction speed and more, but never on being able to mine unlike Litecoin and other Bitcoin-like cryptocurrencies available on the decentralized finance space.

Litecoin and Ripple have a one-year gap in terms of being founded in 2011 and 2012 respectively. Therefore, they have been circulating in the virtual finance market for almost a decade since their creation. Litecoin uses peer-to-peer transactions that have been used like other Bitcoin rivals. You can transact LTC with many available companies that accept Litecoin transactions.

Ripple has been dominating in the money transfer industry and became known to be part of large banks and financial institutions. Ripple (XRP) also has a faster transaction time and a cheaper transaction fee compared to other known money transfer companies like SWIFT, MoneyGram, and Western Union.

Therefore, Ripple surpasses Litecoin in terms of popularity among crypto users and market share value. Ripple being connected to household name brands cemented itself to become a more trusted cryptocurrency. And since crypto has been synonymous with volatility, many crypto users are more drawn to use a cryptocurrency connected to solid financial banks and institutions.

Is Litecoin Better Than Ripple?

Litecoin is more flexible and faster than Bitcoin (BTC) crypto when it comes to making transactions. It could also achieve higher mining reach with less intensive hardware requirements than mining Bitcoin. For that matter, LTC is more like BTC when it comes to making transactions. However, Litecoin v Ripple is very different in terms of the way they present themselves in the virtual finance market.

Ripple vs Litecoin: Which One Is Expected To Grow The Most?

Ripple has a larger market share compared to Litecoin and the XRP’s Price Growth has steady output. It also holds the top 5 spots when it comes to cryptocurrency popularity. The XRP connection to large banks and financial institutions boosted its user base; therefore, it is expected to grow further than Litecoin. Nevertheless, the Litecoin price prediction is quite attractive for long-term investment.

Ripple’s purpose focuses on one function within the business of overseas financial transactions, making it a global contender for known money transfer brands like SWIFT, MoneyGram, and Western Union. However, Litecoin has no particular focus area and is flexible enough to be used in many areas just like Bitcoin. Consequently, its growth compared to XRP blockchain which has lesser competitors than Litecoin.

Competition in the Cryptocurrency Market

There are currently hundreds or more cryptocurrencies available competing in the virtual finance market. And, for sure hundreds or more are trying to climb to the top and many have gone to obscurity. The mysterious creation of Bitcoin by an unknown Satoshi Nakamoto started the revolution in the financial industry. It disrupted the expectations of those finance gurus and famous money makers.

Many could not believe what Bitcoin has achieved nowadays compared to when it first started to exist. There are still many sceptical observant and financial analysts that are still trying to vilify its dominance. However, the market started to embrace the change and many are now trying to learn what once started as a mysterious crypto craze.

That being the case, both Litecoin or Ripple, is part of pushing the legalization of cryptocurrency. They are part of the ever-challenging competition to become the top player in the crypto market. The competition is fierce unlike before Bitcoin started to gain traction and made a dent in the cryptocurrency market.

This happens most of the time, as every new blockchain creator will always try and have something to offer to make their blockchain creation stay in order to be part of the growing crypto competition.

Litecoin vs Ripple cannot be in competition with each other, as Ripple's XRP system is not the same as LTC. They have differences in terms of purpose and market niche. Ripple specializes in cross-border transactions including money transfers that are connected with large banks and other known financial institutions.

Ripple is centralized and controlled by few individuals in a company just like a fiat currency supported by the government. Contrary to Litecoin’s faster than Bitcoin transaction with an almost identical function and purpose. So, if you were to choose between Litecoin or Ripple, which one would you choose?