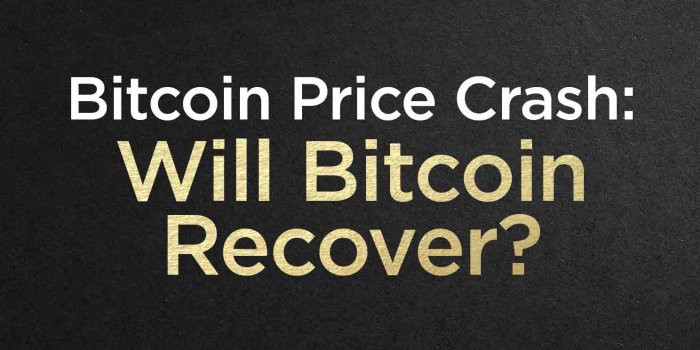 One of the most frequent questions surrounding cryptocurrencies is whether or not they can recover from a crypto flash crash. In this instance, the value of Bitcoin fell 10% overnight, and Ethereum currency experienced worse losses with more than 15%. However, Solana coin was able to escape as it dropped less than 19%.

Will Bitcoin Recover? One thing that traders should take into account before investing their money in any virtual currency would be price stability. If there isn’t enough oversight, people may lose faith altogether. It could lead them away from all cryptocurrency trading altogether. So, to answer the question, Will Bitcoin Recover? Here in The Top Coins, we will answer this question but first, let’s review what Bitcoin is.

Bitcoin is a global decentralized digital currency. It was invented in 2009 by someone under the alias of Satoshi Nakamoto. Bitcoin allows for near-instant transactions and does not require a third party to process the transaction, meaning that your money isn't going through another company before it's finally received or transferred.

The essential quality of Bitcoin is that it has a fixed supply. It means no central government can decide to print more money out of thin air, thus, devaluing each unit in existence without any regard to people who may need access. However, Bitcoin also has some tradeoffs, such as less convenience for budgeting since merchants do not often accept bitcoins and high volatility in price.

How does the value of Bitcoin change over time?

Over the past 13 years, Bitcoin traders have seen ups and downs, including significant price surges. Thus, here is a brief bitcoin price history:

Bitcoin fell to $29 821.28 on July 20, more than half of its record high of $60,000 in March. The price dropped significantly and was level with mid-January 2021 levels before the cryptocurrency enjoyed a profitable three months in which its worth skyrocketed.

But why is crypto going down?

The revelation that Tesla had purchased $1.5 billion (£1.06 billion) in Bitcoin shares raised its valuation, sending the market price of both the cryptocurrency and Tesla surging.

Critics have argued that Tesla’s decision not to accept Bitcoin as payment for its products was the cause of a significant downfall in cryptocurrency prices. This development sparked criticism from many quarters, with some arguing that it is bad news since cryptocurrencies are all based on blockchain technology - 21% down overall.

It's hard to say whether this was a coincidence or not, but it seems like a few factors resulted in the crypto market crash. For one thing, Elon Musk’s recent tweets on using crypto as an investment strategy and positive remarks from him about Bitcoin. It made some investors get excited again, only to lose faith after China imposed strict regulations. This strict regulation of China prevented cryptocurrency trading sites within their borders last month.

According to a warning issued by the Chinese government, the crypto bubble was also affected when China banned financial institutions and payment companies from providing services related to cryptocurrency transactions. The ban includes activities such as dealing in crypto tokens or mining them for profit.

Cryptocurrency prices continue their dramatic rise and fall. Speculative trading of cryptocurrency has also rebounded, seriously infringing on the safety of people’s property while disrupting regular economic order. It is the statement of China regarding the banning.

The Chinese government has banned exchanges and initial coin offerings, but they haven't stopped individuals from holding cryptocurrencies. The institutions must not provide saving services of cryptocurrency nor issue financial products related to these currencies as per China's statement.

But what does this indicate for crypto investors? Can you lose all your money in Bitcoin?

As experts confirm, cryptocurrency investments should be kept to less than 5% of your portfolio. Taking this advice will ensure that you don't feel stressed out by the ups and downs in prices because they are bound to happen. When you are first starting, it is essential to keep your positions small. It will help with the volatility and allow for success in short order.

Cryptocurrencies were once considered an experiment, but now they've become too valuable to disappear. The technology underlying this new digital currency is no longer just worth something in theory; it has real-world benefits that many people take advantage of every day.

From the crypto crash today, Is Bitcoin going to recover? Many investors also become skeptical, knowing that Bitcoin’s volatility is so extreme, it dropped up to 50%. Thus the question, “Is Bitcoin still worth investing ?”

The only sure thing is that crypto is here to stay. It's no longer just a fad. With each passing day, new investors are getting onboard into the crypto space, which means that values will continue to rise over time- with some volatility thrown in for good measure, of course.

Bitcoin hit a new all-time high on October 20, setting it back to $66K. However, the cryptocurrency has fallen again in the past 24 hours and is currently trading at around 60k USD per coin.

Despite the latest high, Bitcoin remains a highly volatile and speculative investment. In reality, after reaching a record high in mid-April, the cryptocurrency quickly lost more than half of its value and fell to below $30,000 by mid-July.

Just as you shouldn't let a price drop affect your choice to buy cryptocurrency, you shouldn't let a quick price surge change your long-term investment strategy. Even more importantly, do not begin buying additional cryptocurrency simply because the price is rising. Before investing extra money in a speculative asset like Bitcoin, be sure all of your financial bases are covered, from retirement accounts to emergency savings.

Now that Bitcoin has recovered from a 50% drop, will altcoins recover too?

With Bitcoin almost synonymous with cryptocurrency, not much attention is paid to the wide range of Altcoins available in this market. The term “altcoin” comes from an alternate coin, meaning it's something different than bitcoin but still has some similarities, such as being mined for profit.

There are over 5,000 "alternative" currencies, the majority of which are Bitcoin and its derivatives. Litecoin, one of the numerous altcoins, is a cryptocurrency that closely resembles Bitcoin. Litecoin's founder, Charlie Lee, refers to it as the "silver to Bitcoin's gold." Litecoin and Bitcoin both use the same codebase.

This likeness extends to the two cryptocurrencies' price movements and market behavior. This likeness is intentional, given that Litecoin was built on the Bitcoin concept. According to the founder, there was a concerted attempt to assure that Litecoin would follow Bitcoin.However, such reliance on a single currency might lead to problems.

For example, if the price of Bitcoin falls, the cost of Litecoin will drop as well. Because Litecoin uses the same software as Bitcoin and mimics its market movement, a problem with the Bitcoin network can harm Bitcoin's value.

It's hard to guess the future, especially in this industry. Bitcoin is still an asset that has yet to find its true value; it may come out of this "bear market" stronger than ever, or not. It's impossible to know, but the potential increase in the number of investors—or even a possible correction to Bitcoin price could spur its recovery.

Either way, one thing is for sure: Bitcoin's popularity will continue increasing, and it will stay a part of the world economy. Many people see this as an excellent opportunity to buy at an affordable rate before cryptocurrencies become mainstream.

Bitcoin has been in the headlines a lot lately. Is it just another fad? Or is this currency's value here to stay? Bitcoin may recover, but it’s impossible to know for sure. We do know with certainty that the value of cryptocurrencies fluctuates wildly and can change at any time.

Whether you want to invest in bitcoin or use bitcoin as a payment system, keep reading our blog posts on all things related to digital currency, so you stay up-to-date on the latest trends!