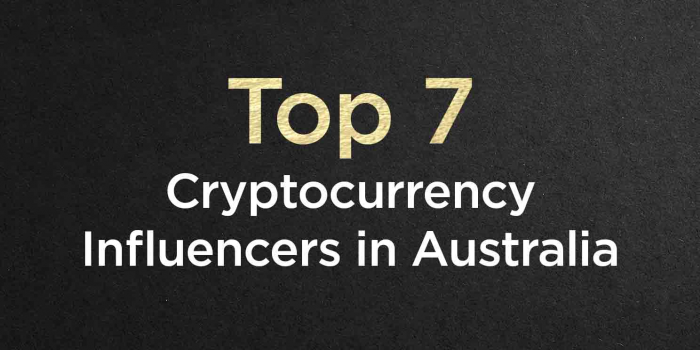 Cryptocurrencies are considered digital currency also known as electronic money. They have no physical form as currency or banknotes. Instead, these digital tokens were created from code using an encrypted string of data blocks called a Blockchain. A digital coin can be created by anyone who can generate it, so thousands of cryptocurrencies can be traded. The Reserve Bank of Australia’s website about Bitcoin technology and what it is used for.

What do you do when investing in cryptocurrencies if you are an investor? Do you go all in and forget the banks? Should you even put money in this new generation of the market? Or do you just ignore putting your hard-earned cash in it and just spectate from afar?

Naturally, if these questions come to mind, you would look them up online. And, just like any niche, cryptocurrency has its community of self-made personalities - influencers on social media. There are hundreds of crypto profiles in Australia alone that you can look up online. However, not all of them claim who they are. After all, you cannot trust social media personalities entirely.

So, at The Top Coins, we did intensive research to see the best of the best when it comes to cryptocurrency analysis in Australia. We searched for the top AU blockchain backers and several blockchain influencers from around the world.

Our top 10 most influential Australian cryptocurrency experts, investors and traders are here, plus a bonus list of non-local personalities.

But, before we continue, know that none of this is financial advice, nor do we guarantee that the provided people on this list will grant you huge profits if you depend entirely on them. Also, please note that the persons listed here are not categorized by order.

Former director of Australian Digital Commerce and co-founder of AgriDigital, Emma Weston proved her worth and became part of the Top 25 FinTech Influencer in Finder.com.au. She was also granted the 2017 Female Fintech Leader of the Year and is now the Deputy Chair of FinTech Australia Ltd. The blockchain, AgriDigital, helps farmers trade and store grain with a supply chain tracking business system. This operates in 34 countries and has been helpful to the agricultural sector of Australia.

AgriDigital is a digital currency that works similarly to the potential project VeChain - providing transparency between the buyer and the seller so they know the quality of the products they receive.

A tech veteran and a reliable advisor for blockchain investments, Rob Morris is one of the strongest influencers in Australia when it comes to knowing which cryptocurrencies will lead to a better future (and also high profits).

Rob Morris is the CEO of the tech company Prismatik - a business that aims to innovate and solve technology problems between companies and individuals.

Businessmen in Australia consider Nick Giurietto as one of the country’s pioneers in sharing the good news of Blockchain. He aims to merge blockchain technology with major corporations in Australia through a mutual agreement with the government and businesses. However, he still fights the good fight as he is taking steps in completing his goal, including the influence of CBA allowing crypto options for their users.

Sheldon Evans is a famous crypto influencer in Australia and a well-known personality on YouTube. Sheldon Evans is popular for his easily digestible videos on what you should know about specific cryptocurrencies like ADA and ETH. He brings insights on blockchain technology to beginners and deciphers them into words that everybody can understand. In addition, he suggests coins that may skyrocket in the future and recommends other means to earn from crypto, including staking and buying on big dips.

Many consider him a trustworthy crypto influencer mainly because of his safe picks and the right calls on tokens that mooned before the end of 2021. He currently has more than 725K subscribers on YouTube and over 228K followers on Twitter.

When you talk about crypto in Australia, one of the people that come into mind is Nugget’s News. With more than 145K subscribers, Alex Saunders runs the largest crypto YT channel in Australia that maintains credible information, unbiased hot takes and helpful advice. He is also considered an advisor and speaker for blockchain start-ups across Australia.

Perhaps one of the most powerful influencers and the strongest top AU blockchain backers when it comes to local cyberspace, crypto expert Fred Schebesta is a digital marketer, blogger and expert commentator when it all boils down to providing recommendations for cryptocurrency investments. He is also the founder of Finder.com.au and has been educating his followers on smart crypto investments.

Finder.com is a billion-dollar enterprise that is available in ten countries. Finder is an investment website that helps you seek various ways to build up your savings and the best deals regarding home loans, car loans, life insurance and shopping deals. It also works as a cryptocurrency platform to buy and sell the coins and tokens you like.

As the former Managing Director of DigitalX and Vice-Chairman of the Australian Digital Commerce Association, Leigh Travers spearheads one of Australia’s most successful Blockchain advisory services. He also contributed to the success of PowerLedger as well as SingularityNet ICOs. He is currently the CEO of Binance Australia.

Australians know him as the co-founder of Coinstart: a business dedicated to helping out individuals in starting on cryptocurrency investments. But, ever since its launch, it has become so much more: a company that lets you in on the scoop regarding the newest ICOs. These NFT projects may have a positive impact in the future and an analysis of the overall health of the Bitcoin market.

Not only does James Stewart contribute as one of the top AU blockchain backers, but he also made his clients rich thanks to Coinstart’s reliable recommendations. He is the current Marketing Manager at Stealth.

As one of the more unorthodox personalities in Aussie crypto, Trader Cobb specializes in various trades, including day trading, swing trading, and scalping. He used to trade in the standard markets but the potential of Bitcoin made him a prominent crypto personality ever since. He also offers online courses for those who want to take trading seriously as a full time or part-time job.

Naomi is one of the most well-known internet personalities in Australia regarding Bitcoin talks. Before the colossal boom of BTC, she’s already been in the space since 2013, back when she used to call herself Bitcoin Girl. With more than 10k subscribers on YouTube and more than 48K followers on Twitter, she has gained the trust of Aussies with her unpretentious perspective on cryptocurrency.

Everyone knows Roger Ver as “Bitcoin Jesus” especially during the initial promotion of Bitcoin back in 2011. However, when the BTC boom happened from 2015-2017, his presence became even more influential after proving that the currency could bring in massive profits that nobody in the financial market had ever seen. Making gains beyond anything stocks can do, Bitcoin soon became a new phenomenon where everybody wanted in on the craze for that “get rich quick” profit but with more legitimacy than MLM groups.

Nowadays, his Blockchain feed serves as more reliable source material than mainstream news. After all, if he predicted the outcome of Bitcoin, who’s to say he’s wrong on his next analysis?

When it comes to a new generation of an art form, one of the names that come to mind is Jason Don: popularly known as CryptoBrekkie or Brekkie Von Bitcoin. He fully supports non-fungible tokens and believes that NFTs will provide better income for digital artists worldwide. Additionally, he is known for posting Bitcoin art on his YouTube channel and Twitter.

Kraken Director of Growth Marketing Dan Held is a Bitcoin entrepreneur who explains how cryptocurrency works. Dan does it best if you need to know more about the blockchain without any excessive technical jargon.

His Twitter influence also grows large with more than 261,000 followers as well as having a network with other big-name giants such as Roger Ver and Vitalik. Speaking of Vitalik, he’s next on our list.

Arguably the biggest influencer in the blockchain niche, Vitalik created Ethereum and co-developed Bitcoin. Everyone in the crypto community knows Vitalik, especially since Ethereum has contributed a lot to cryptocurrency, especially for altcoins. Without Ethereum, a lot of altcoins would not exist. Likewise, NFTs and decentralized games and audio would never come into reality today without ETH. Ethereum forks became possible, proving that Bitcoin is not the only cryptocurrency that can do so.

With a major contribution to the crypto market and a new form of the economy as a whole, Vitalik is not just influential in Australia but also for the entire world.

There are still plenty of other great crypto influencers, but these top AU blockchain backers stood out the most and have contributed more than just cryptocurrency. They also provide detailed procedures on how to buy Bitcoin safely. With their presence on social media, more people become aware of the potential value of crypto. That said, it may become the future of fiat currency - much like the establishment of the dollar bill in the 19th century. We may not know what the future holds but with people having superior knowledge of what is to come in the world, putting your money where their mouth is may just bring you profits unlike any other form of income.