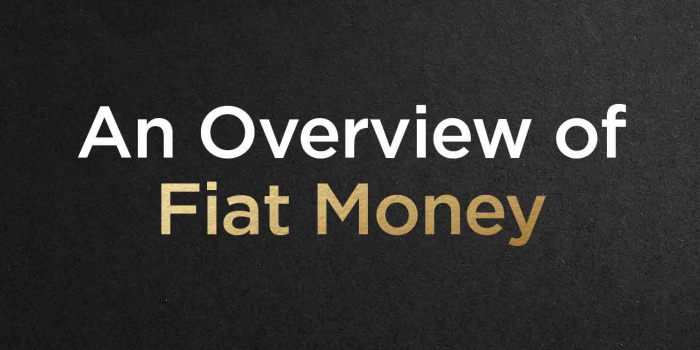 An Overview of Fiat Money

When it comes to financial exchanges, you often hear the term “fiat money”. Likewise, you’ve seen it used in stock exchanges and, more commonly, cryptocurrencies. So, what exactly is fiat money? Why does possessing it play an essential role for investors and traders? It may sound fancy but it’s a formal term for regular currencies. These include the US dollar bill, the Japanese yen, the British pound, the euro; you get it. This article will look at how fiat money (or fiat currency) plays an important role in the general economy and why it may or may not become obsolete soon.

Note: This article is not financial advice.

What is Fiat Money?

As I have previously mentioned, fiat money comes in the form of the modern currencies based on the country you live. But, of course, the world revolves around the US dollar. Usually, when the USD gets affected for better or for worse, the other global currencies replicate its movement. To this day, the US dollar is a controversy among rivalling countries such as China and Russia as to why the market should follow the American currency over other forms of currency.

Based on how America is going, the country’s supremacy leaves other nations polarized about USA’s dominance. Some may argue that nations should be independent of the American dollar because not everything is about the USA. However, whether other nations agree or not, the USD remains the top form of currency for penny stocks, blue-chip stocks and cryptocurrencies (although the latter works a bit differently compared to its rivalling stock market).

A Brief History of Fiat Money

During the Yuan, Tang, Song, and Ming dynasties of China (960-1368), fiat money emerged. Metallic currency was in high demand during the Tang Dynasty (618-907) since precious metals were in short supply. To make it more convenient for buyers and sellers, they used credit notes in the form of paper.

People were forced to trade coins for notes as a result of coin scarcity. During the Song Dynasty (960-1276), the Sichuan region experienced enormous growth in trade, resulting in a copper money crisis. Traders began issuing private notes backed by a money reserve and became the first legal currency. Paper money was made the only legal currency during the Yuan Dynasty (1271-1368), but silver was soon restored as a major currency. The government raised money through inflationary financing by issuing additional notes, thus creating fiat money.

Fiat money is characterized by its acceptance based on decree or decree authority rather than on the intrinsic value of the metal content.

The Establishment of the Dollar Bill

In the 18th century, the West began to use paper money. Bills of credit were created and used by the American colonies, France, and the Continental Congress to make payments. Notes from the various provincial governments were utilized to pay taxes to government officials. Because of concerns about inflation, there was a lot of controversy over the printing of too many bills. There were no gold or silver mines and no mint for coinage.

When cash was needed to make a payment, a merchant had to borrow banknotes from a broker and pay interest.

Merchants soon began accepting bills of exchange – documents issued by banks which entitled the holder to collect on a pre-specified future date a sum equivalent to the face value of the note from another party in exchange for a discounted present value of the note due to the time value of money.

The use of bills of exchange helped to reduce the cost of borrowing for merchants and made it possible for them to extend credit to their customers.

Paper money has been around for a long time, and it's not going away any time soon. Despite the controversies that have arisen throughout history, paper money has

In 1781, Robert Morris oversaw the formation of the first American national bank, which became known as the Bank of North America. It had a huge influence on American commerce.

In certain locations, such as New England and the Carolinas, the bills depreciated significantly, and commodity costs rose as a result of this. During conflicts, nations turn to fiat currencies such as "Greenbacks," which are currencies that have no value. For example, the Federal Government of the USA used "Greenbacks" during the American Civil War as a way to pay for the North's efforts.

People in South Carolina then began using "Greenbacks," which caused prices to inflate significantly throughout the state. Inflation was also a result of banks printing too many notes without having enough gold and silver to support their currency. As a result, merchants charged higher prices to make up for the loss in value of the currency.

The Bank of England as the Catalyst

The Bank of England began to issue banknotes in 1694 after King William II withdrew his proclamation that prohibited interest bearing loans in cash. The notes were initially handwritten on £20 worth of parchment. They were then hand signed and numbered by hand, which made it very expensive to produce. In 1725 two different printing firms were given the contract to produce the notes, which helped to reduce the cost.

The Bank of England was not the only bank issuing notes at this time. There were also a number of other banks that issued their own banknotes, which caused a lot of confusion and led to depreciation in the value of banknotes.

During this war, the government suspended the convertibility of its paper money to gold or silver.

In the early part of the 20th century, the federal government and banks had committed to enable the convertibility of notes and coins into their intrinsic goods on demand. The high cost of the American Civil War and the necessity to restore the economy compelled Washington to withdraw its offer.

The Bretton Woods Agreement established the price of one troy ounce of gold at $35. In 1971, United States President Richard Nixon introduced a series of economic initiatives, including suspending dollar-to-gold direct convertibility due to diminishing gold reserves. Most nations have since utilized fiat currencies that can be exchanged for other major currencies.

The word fiat comes from the Latin phrase, meaning "let it be done." As previously stated, fiat currency is today’s form of money such as the dollar bill, Korean Won and Indian Rupee.

The United States’ position as a global economic superpower contributes to the dollar's value. The majority of commodities, including oil and gold, are bought and sold in dollars, giving the US currency so-called reserve status (most countries' central banks keep large quantities of dollars). Similarly, the eurozone economy's robustness has boosted the euro's value, making it the second-most-used currency in the world.

Meanwhile, Bitcoin and the rest of the cryptocurrencies are not regulated by governments. Their value is based purely on supply and demand. This makes them attractive to some investors as they are seen as less risky than traditional currencies, which can be affected by economic factors such as inflation and deflation.

Bitcoin, the most prominent example, appeared in 2009 during the global financial crisis as a result of worries about the worldwide financial system's stability. It swiftly took hold owing to concerns over political instability and governments taking on too much debt. There are presently more than 5,000 cryptocurrencies in circulation, each worth more than $100 million (€80 billion).

Bitcoin transactions are secured by blockchain technology, which isn't confined to one server but a worldwide network of computers, reducing the risk of fraud. This is also the method used to discover new Bitcoins, although there is a limit on how many may be created — 21 million — that will be reached by 2040.

Disadvantages to the use of cryptocurrencies include the fact that they are highly volatile, with bitcoin's value soaring from less than $1,000 at the start of 2017 to over $10,000 by mid-December during that year. Soon, the media showed attention to it and displayed the many rags-to-riches stories of small-time investors that suddenly became millionaires. In addition, cryptocurrencies are not universally accepted and can be difficult to convert into fiat currencies. That said, there might be opportunities to profit by investing in cryptocurrencies, but this can also be considered very risky. As with any investment, you should only part with money that you're prepared to lose, given the volatility of cryptocurrencies.

Right now, fiat currency is fiat currency. The world economy revolves around money and its regulated transactions from all over the world. Crypto investors and Bitcoin shills may say that crypto will take over the world and become the primary legal tender but the world is still afraid of such a change.

A possible future may lead to people slowly adapting to the existence of Bitcoin in everyday life but until then, not everyone knows how a blockchain works. It is an understandable reason since cryptocurrency involves complex technologies that want to shape the future of mankind and businesses. However, as long as large bank companies and governments refrain from the usage of cryptocurrencies, such as Australia’s strict implementation of crypto taxes and putting money in crypto platforms, it will take a long time until everybody fully accepts Bitcoin and its altcoins as the new generation of transactions.

As of this writing, more people are beginning to become familiar with cryptocurrencies thanks to corporations announcing their collaboration with blockchain developers such as the Metaverse news and mainstream media constantly talking about the financial state of the crypto market. Maybe the Bitcoin holders could be right about crypto replacing the dollar bill, but they could be wrong as well. Either way, it is ultimately up to you to decide if you want to support blockchain technology or make safer choices of relying on the more tried and tested fiat market.

Australian Computer Scientist Keeps $71B Worth of Crypto, Claims He Created Bitcoin
07 Dec 2021

How to Start Your SMSF? Guide About SMSF Investment Strategy
01 Dec 2021
What Will Replace Bitcoin
Discover TPR