Currency Converter
The Top Coins > Blog > Cryptocurrencies > 9 Best Ways Of How To Use Cryptocurrency: Offline and Online 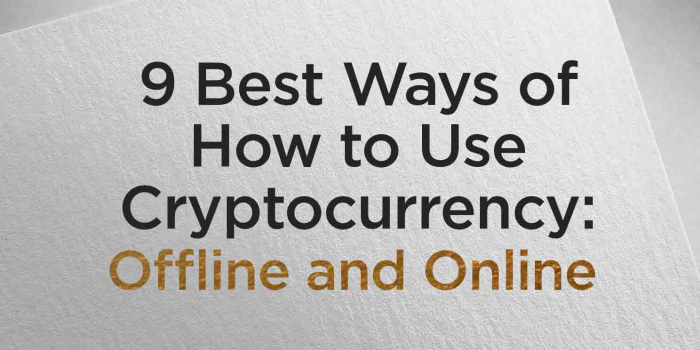 9 Best Ways Of How To Use Cryptocurrency: Offline and Online

The world of cryptocurrencies is vast and new, but it can be an exciting prospect for those ready to dive in. There are many coins on the market today with different purposes and levels of security. There are two main ways to use cryptocurrency: exchange them with your local currency or purchase products and services online with them. However, there are other uses of cryptocurrency. Read on to know other ways on how to spend cryptocurrency.

Cryptocurrencies Integration Into the Economy

Cryptocurrencies can impact the economy on all levels of society, from medium-sized businesses to major corporations and global economic staples. With cryptocurrency on the rise, the number of jobs related to these currencies is expected to grow significantly over time. The demand for Blockchain professionals has increased in recent years. The number of jobs available has ranged from just over 1,000 to 4,000 (2016 to 2017), with software engineers the most sought. They offer an excellent salary and benefits package with many opportunities for growth on top.

Cryptocurrency is a secure and verifiable way to trade internationally. With cryptocurrency, citizens living in unstable nations can freely exchange their money with others on more prosperous courses without fear of government or currency intervention--this means economic equality globally.

Cryptocurrencies will not replace governments to a full extent, but they will have a large impact on the economic side of our society. They introduce many positives into our current financial system that should be carefully explored and considered as the world moves forward. Cryptocurrency may be one of those things seen as so forward-thinking it seems obvious now especially decades from now where we see the true benefits of investing in it.

Where To Spend Cryptocurrency?

Here we need to list more online ways of using crypto and describe the existing ones thoroughly.

The video game industry shares many similarities to cryptocurrency, such as people’s refusal to accept it as a legitimate industry when it first became mainstream. Along with video games having their own in-game currency which mimics cryptocurrency.

Buying video games or new game consoles like the PlayStation 5 or Xbox Series X would be a great way to start spending your cryptocurrency.

VR technology is growing at an amazingly fast rate, and just recently the industry made a tremendous step forward. Last month Facebook released their latest headset, the Oculus Quest 2. The Quest 2 has not only blown away the expectations of the public but Facebook was incredibly surprised by the number of people wanting to buy their headset.

VR is the future of both gaming and working, so getting in on the market now is a great way to make sure you are not left behind.

One cool thing you can do right now is trade your cryptocurrency for another, and in the future, it will become much easier and faster to do. You can do this if you want to change from say Bitcoin to Ethereum if you feel one will do much better going forward.

One of the first industries to embrace cryptocurrency was the gambling sector, specifically online gaming casinos. Online casinos love cryptocurrency since it is instantaneous. They can track where it is being sent to avoid fraud.

Some online merchants allow you to pay bills using cryptocurrency. If you have Bitcoins in Canadian Dollars, then some sites will exchange them for cash. Once the transaction has been completed and converted into regular currency, you can use your funds just like any other bank account. You must be careful. There are phishing sites that can hinder the security measures you have and steal your crypto assets.

Petrol is something everyone needs in this day and age. Hence, it makes sense that this would be one of the things people would use their cryptocurrency to buy. Especially with the rewards, you can earn by using the Visa crypto debit card.

A common concern people have is paying their car rego which depending on what car you drive and your license history, it can run pretty high. Paying for your rego with cryptocurrency would be fast and straightforward compared to traditional currency.

The weekly shopping trip is something every household does. Still, the most annoying thing that can happen is being stuck behind someone at the checkouts that is taking forever to pay with cash. If they were using cryptocurrency, the payment would be instantaneous and get you out of there and home much sooner.

Cryptocurrencies are a great way to avoid foreign exchange fees while on the road. Cryptos eliminate most of your money problems when traveling abroad, like getting ripped off by bad exchanges or paying high commissions in other countries. If you’re wondering where to spend cryptocurrency, you can find travel agencies accepting digital coins. Not to mention that there are Bitcoin ATMs emerging worldwide. You can learn how to cash out Bitcoin easily since it works similarly to the traditional ATM.

Bitcoin is a revolutionary new form of currency that has been gaining traction in recent years. As of September 2021, over 150 000 businesses worldwide accept bitcoin. Bitcoin is known to be the best utility token nowadays. Ether, the second most popular cryptocurrency after Bitcoin, is a lot less accepted in comparison. But it has seen significant growth in just a short period of time.

Microsoft's decision to accept Bitcoin payments is significant. It goes some way towards instilling confidence in using crypto and further legitimizes it as a form of currency for transactions when purchasing products or services on Xbox Live, Skype. Bitcoins are redeemed for topping up user accounts.

It's never been easier to pay for your movie ticket with cryptocurrency. The AMC chief Adam Aron revealed the theater chain would also accept Ethereum, Litecoin, and Bitcoin Cash when these payments are available.

PayPal is now accepting a select few cryptocurrencies, including Bitcoin, Ethereum, and Litecoin. Users can buy or sell these coins through the company's digital wallet with money not able to be transferred out of it--a major drawback.

Starbucks is a major player in the coffee industry, and they are looking to keep up with the times. Starbucks has been on a journey to become more accepting of cryptocurrency, and now they've teamed up with Bakkt. The new app will allow you to convert your cryptocurrencies into dollars for use at Starbucks stores worldwide.

Advantages of Paying with Crypto

P2P cryptocurrency transactions protect your privacy by not requiring you to provide identification. Most P2P exchanges allow cash or other forms of exchange that support privacy protection when funding a transaction, so it is easy for people who want their finances kept secret from third parties such as government entities and banks.

Blockchain technology has the potential to revolutionize how transactions are processed and recorded, which in turn can lead us down a path towards greater social justice. By eliminating middlemen like governments or banks from these processes, we may reduce transaction costs exponentially while generating more sustainable outcomes for everyone.

It removes reliance on authority or a third party to oversee transactions between people. It means that transactions are direct and decentralized, which makes them anonymous, safe, and secure. There's no mediator to skim off the top.

Cryptocurrency is becoming more accessible because of the speeds with which it can be sent around the world. It is also more widely accepted as a currency, given its unregulated nature. Crypto is accessible because it's available, decentralized, scalable, and cost-saving.

Is It Possible to Buy Gold With Crypto?

You can buy gold with crypto, but it may not be what people think. With so many websites claiming to offer cryptocurrency to gold conversion, it's hard for buyers to know who they should trust.

Yes, you can purchase gold using cryptocurrencies if the company accepts crypto as payment for its products. However, there are limitations on what types of cryptocurrency one could use and how much they would have to spend before making this transaction.

For example, some companies only accept bitcoin currency, while others will also accept Ethereum or Litecoin but not all three at the same time. Additionally, different exchanges may require differing amounts of cryptocurrency depending on which type is purchased from them.

Does the Future Belong to Crypto?

As the world transforms into a more digital economy, it's hard to imagine how we can continue without crypto. The gaming industry has been using non-standard digital currencies for years. These companies, specifically gamers, are comfortable with crypto and blockchain use cases because they represent a natural evolution of an existing concept that's already popular in esports, which will lead this new wave when it comes to adoption by other industries.

More than a half-dozen public corporations currently have some cryptocurrency. Many more are beginning to offer services to customers who want to acquire Bitcoin or businesses who want to store it or accept it as payment. PayPal (ticker: PYPL) made a major impression last month when it announced that some users would be able to pay with their crypto holdings as easily as cash.

As cryptocurrencies continue to grow in popularity, it's clear that they are here to stay. After all, blockchain technology is still relatively new, and the world of finance has been notoriously slow at adopting anything that doesn't have a long-standing precedent.

There are many ways to use cryptocurrency, but the best way is for its original purpose to make transactions. Suppose you want your investment in cryptocurrencies to grow over time. In that case, you mustn't invest more than what you can afford to lose because there are no guarantees with this type of currency.

You also shouldn't invest money that needs a relatively quick return on investment. You should be ready and willing to take risks when investing in digital currencies like Bitcoin or Ethereum. It will help ensure long-term growth while protecting against short-term losses due to market volatility.