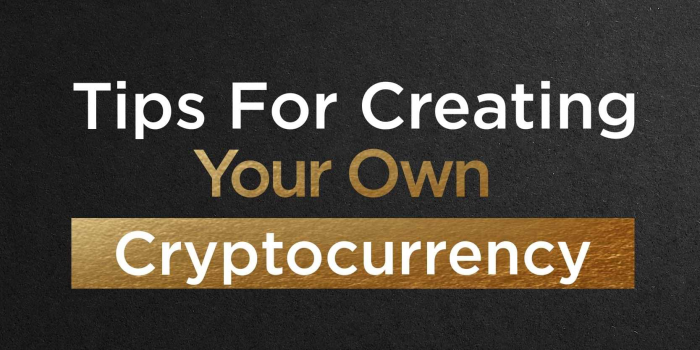 Tips For Creating Your Own Cryptocurrency

While the cryptocurrency industry launches to the moon, more and more new altcoins are entering the market, addressing gaps in the current lineup and introducing new protocols that are constantly innovating the industry. Despite there being a never-ending selection of ICOs to support, the success rate for creating a coin is extremely low.

46% of ICOs launched in 2017 failed or went out of business by early-2018 despite being propelled by the bullish market. Retaining relevance for years even harder—the market is notoriously competitive, so ICOs now need an incredible product to accompany a compelling cryptocurrency to stand out amid the likes of Ethereum, Cardano, and Stellar.

Even so, developers are braving the difficulties of creating and launching cryptocurrency—a time-consuming and resource-intensive process that requires ample dedication and funding. Here’s a basic rundown of what you need to start.

While cryptocurrency is, in theory, no more than a digital alternative to fiat money, there’s a complex system that operates behind the scenes and enables each coin to function the way it does. Cryptocurrencies pride themselves on being peer-to-peer and decentralized, moving outside banks’ and financial institutions’ lines of sight and enabling cross-border transactions at a negligible fee.

It all starts with a blockchain. It’s a series of data blocks secured by a protocol that protects all information stored within. Every time nodes validate transactions on the network, a new block is formed and added to the chain. This is done through a peer-to-peer process called mining, wherein computers owned by members of the community help process the transactions and build the blockchain’s transaction history. There are various ways coins can be mined—through the Proof-of-Work, Proof-of-Stake, or an internal, smart-contract-based algorithm. Miners are incentivized with token rewards, which are often distributed per mining or staking cycle.

An important aspect to know is that most cryptocurrencies have a maximum cap forever or per year. The sense of scarcity helps increase its value while also ensuring that the market remains as liquid as possible. Everyone on the network can view transactions on the blockchain, granted you have access to the public address corresponding to a particular user or transaction.

The terms “coin” and “token” are used interchangeably in the industry, but there are factors that differentiate the two. Most of the popular cryptocurrencies are coins—they’re essentially the native currencies corresponding to particular blockchains, like BTC for Bitcoin, ETH for Ethereum, and LUNA for Terra.

Some blockchains—notably Ethereum and EOS—have the capability of allowing developers to build new cryptocurrencies on top of the existing network. These cryptos are classified as tokens, as they don’t operate on a unique blockchain. They’re often denoted by standards, such as the ERC-20 token standard or ERC-721, which define the subcategories for tokens minted on the Ethereum network. Using the innovative technology spearheaded by these industry leaders, anyone can create tokens, which are often used as securities, rewards, and virtual currency.

There are various ways you can mint new cryptocurrency, most of which require high-level programming skills to execute all functions correctly and ensure that automation features go smoothly, as decentralization plays a big role in a coin’s relevance.

Build Your Own Blockchain

If you intend to create a fully functioning coin with its own blockchain, you’ll have to start by employing skilled programmers and developers to handle the foundational work. It’s extremely important to plan ahead and establish all the important facets of the network and how users could interact with it from the get-go, as all features rely on a compatible blockchain to operate. In particular, you need to decide on the consensus algorithm, design the nodes, integrate APIs, and more before getting to the specifics of the cryptocurrency that would power it all.

Fork From An Existing Network

In the realm of blockchain technology and cryptocurrency, there exists a feature called “forking.” Like a fork on the road, forking essentially splits from the original network, creating two separate chains: one that starts from the beginning and moves in a straight line, and another that starts from the beginning and changes course where the fork begins. Depending on the type of fork you choose to establish (whether a hard or soft fork), your control over the network varies.

Ethereum is a popular example of a fork—it’s a hard fork from the original Ethereum network, which has now been rebranded as Ethereum Classic. These two networks operate independently from each other, with different development teams, different cryptocurrencies (ETH and ETC), and don’t overlap in terms of governance. Their only similarity is a shared transaction history up to the point of forking.

While forking from an original network requires less work from the programming side, know that you have little control over the “new” cryptocurrency. The entire community will also have to work together and agree on the specifications of the fork, so it isn’t a solo project that you can casually undertake.

Use a Cryptocurrency Creation Platform

Cryptocurrency creation platforms allow you to create tokens on top of existing blockchains, such as Ethereum and Cardano, with little to no programming work. WalletBuilders is an example of an extremely simple crypto creation mechanism where you can create your own cryptocurrency free. It only requires you to input a few fields before officially being the “creator” of a token. This method is ideal if you only need tokens for hobby use or small-scale activities, like a digital token-collection promo for your small business.

Likewise, it’s also possible to directly build on top of Ethereum and other platforms for more serious projects. By utilizing the ERC-20 standard, you will essentially have a fully functioning token that can eventually be released as an ICO. A popular use case for this method would be blockchain-based games, where in-game currency is tokenized into actual ERC-20 coins, like AXS for Axie Infinity, and more.

There are a few blockchains that support cryptocurrency creation, but the three most popular options are Ethereum, EOS, and NEO. They stand out for having full-fledged token standards that moderate the quality of tokens being created on each network, which is essential for automatically removing common bugs and known issues that developers wouldn’t be able to reverse if left unaddressed.

Creating an ERC-20 token on Ethereum requires knowledge of Solidity, the blockchain’s native programming language. Seasoned developers believe that this language isn’t particularly difficult to learn if you already have a background in Java, C++, or C#, so the barrier of entry isn’t as challenging as it may initially seem. Despite the need to learn Solidity, Ethereum remains the most popular network out of the three due to being the first to introduce the token creation capability to the world.

Etheruem runs on a native virtual machine and operates through the Proof-of-Work consensus model—but that will be switching to the Proof-of-Stake once the network’s 2.0 upgrade rolls around. One of the biggest advantages of building on Ethereum is the ability to use smart contracts to automate if-then actions, allowing a fully decentralized token. However, it falls short with a measly capacity of 15 transactions per second.

Neo is often known as the “Ethereum of China,” providing essentially the same service but on a different platform. Like its predecessor, Neo utilizes a native virtual machine and employs smart contracts to automate functions within the blockchain. However, tokens can be minted through the NEP-5 standard, coded through common programming languages, such as Java, C#, Python, Kolin, and more. It’s a great starting point for new developers, as you won’t have to learn an entirely new language to get started. What makes Neo unique is its Delegated Byzantine Fault Tolerance (dBFT) consensus model, which works similarly to the Proof-of-Stake. Without a heavy mining process, Neo has a 10,000 transaction-per-second capacity, easily beating Ethereum in terms of scalability.

Cryptocurrency EOS is a popular blockchain, originating as an ERC-20 token on Ethereum before transitioning into its own network. It’s a faster version of Ethereum with a capacity to process up to 3,000 transactions per second. Tokens minted on EOS follow the EOSIO. Token standard, a protocol that allows developers to maintain all the necessary regulatory elements that ensure smooth rollouts. On that note, developers can use C++ and any WebAssembly (WASM) programming language to code on the EOS network.

New cryptocurrencies play an important role in challenging old standards and continuously innovating the industry, keeping things fresh and up-to-date in a quickly evolving digital economy. After learning how to create your own cryptocurrency, what do you think? Are you ready to delve into the world of ICOs and tokenized transactions?