Currency Converter
The Top Coins > Blog > Cryptocurrencies > Litecoin vs. Bitcoin: Litecoin is Competitor or an Addition to BTC 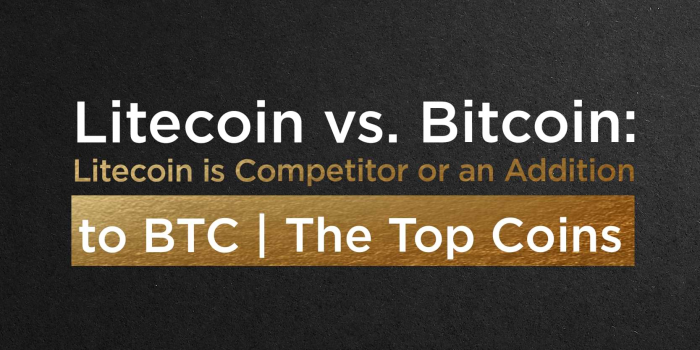 Litecoin vs. Bitcoin: Litecoin is Competitor or an Addition to BTC

In this blog, you’d know there’s no Bitcoin vs. Litecoin in terms of the basic structure of cryptocurrency. Still, Litecoin, as the later update of Bitcoin’s source code in 2011, has some additional features and facilities.

In the last decade, cryptocurrencies have secured some popularity since the advent of Bitcoin in 2009, bringing about extreme ease in currency exchange, money transfer, and other payments. Although there are many other digital currencies developed over the past decade, the invention of Bitcoin as the first cryptocurrency format has enabled it to lead the market with a capital value of USD 176 billion.

Besides the fact that it was a primitive digital currency, it didn’t undertake as many updates in its algorithm as its counterparts took to provide the best experience in digital currency. Bitcoin follows the blockchain technology to ensure decentralization and transparency of the currency over network nodes, and so does Litecoin.

Litecoin and its Competition to Bitcoin

Litecoin was created after Bitcoin in 2011, aimed at increasing the speed of transactions and accessibility of the payments in the arena of digital currencies. Litecoin was a copy of bitcoin’s source code but had additional features, as explained in the detailed Litecoin (LTC) currency article. The most prominent features include the capacity of Litecoin for the generation of 84million coins that is far more than the ability of Bitcoin to generate about 21 million coins.

Furthermore, due to the increased transaction speed, more and more crypto investors are willing to invest in LTC. The LTC to BTC and BTC to LTC conversion is quite easy and achievable, just like Euro to Dollar and vice versa. Moreover, the fact of the matter is, both the cryptocurrencies have high fluctuations in their rates, so when you decide to convert LTC to BTC or vice versa, you may have to compromise over the exchange value.

But many investors keep on struggling over recognizing the latest trends to understand which currency can lead the world of digital currency in the future. Thus it is right to analyze if Litecoin is a Bitcoin competitor or not or if Bitcoin can leave the stage in the immediate future or not.

If not Bitcoin, What is the next Bitcoin?

According to some economic experts, Litecoin has the full potential to overtake Bitcoin as it is updated and provides the fastest generation of the block with the structure of the unique mining function of hashing. However, Litecoin with all of its appealing features falls at the 6th position in terms of market capital value while Bitcoin is at the top. Therefore, in order to get the results of Bitcoin vs Litecoin we need to take into account other cryptocurrencies like Ethereum, the second on the list after Bitcoin that is doing great in market competition, and other Cryptocurrency Alternatives to Bitcoin.

Additionally, we cannot consider Litecoin as the Bitcoin competitor as it complements the structure of Bitcoin in one way or the other.

Bitcoin has remained a true space for safe storage of value in digital format whereas Litecoin was established upon the idea of greater access and ease of payment method. Bitcoin primarily ensured the security and storage of value that was complemented by fast transaction speed and greater accessibility of the hashing functions of Litecoin.

Since the algorithm of Litecoin complements the strategy of Bitcoin, there are many similarities between both cryptocurrencies. For instance, both use a similar mining process such as Proof of work to authenticate and generate the value in the ledger that is public in nature. As there is an easy process of conversion from LTC to BTC and vice versa, a large majority of investors have invested in Litecoin and don’t feel about it as a Bitcoin competitor, though there are some differences in their operations.

How Litecoin differs from Bitcoin?

The investors, especially after Tesla’s tweet begin investing in Bitcoin dramatically but that didn’t subside the preference of Litecoin, due to its several additional features. Although there are a lot of parallels between Litecoin and Bitcoin in their basic structure and idea, there are some major differences when we get into the details of Bitcoin vs. Litecoin.   And these different and unique features of Litecoin have secured Litecoin greater investments throughout the past few years and you can also check out How to buy Litecoin to avail the benefits.

The reliability of Litecoin lies in the fact that it provides the fastest Transaction speed for payments which is not present in the functioning of Bitcoin.  The transaction time is the time consumed in the verification and addition of a block of data into the blockchain database or public ledger. Bitcoin has a transaction speed of approximately 9 minutes whereas Litecoin has a speed of 2.5 minutes. This is the reason why investors love to prefer Litecoin over Bitcoin.

Bitcoin, being the oldest cryptocurrency, has the largest market cap of around $1 trillion until 2021, which is the total value of all those bitcoins currently in circulation. Whereas Litecoin lags behind Bitcoin in the domain of Market Capitalization because it has a market cap of $13.7 billion. However, this is not just Litecoin that cannot compete with Bitcoin in terms of Market capitalization but even the second most popular Ethereum is unable to beat Bitcoin with $ 212 billion of market cap.

Circulation and Division of Currencies

Bitcoin can only print 21 million coins in competition with Litecoin that has the ability to provide 84 million coins. Though it may seem a greater advantage over Bitcoin, actually both the currencies can easily be distributed and divided infinitely which provides facility for currency exchange, distribution, and circulation. For example, it is the ability of Bitcoin to be divided up to 100 millionth part of it to allow the customers to make even the smallest payments through Bitcoin currency.

To cut short, it is hard to predict what is the next Bitcoin, because Bitcoin with the greatest market cap is here to stay, no matter what. Also, Litecoin is not a Bitcoin competitor but complements the structure of Bitcoin in various ways. Besides, both the currencies are easily convertible into each other such as from LTC to BTC or BTC to LTC at the available exchange value. However,  Litecoin has some efficient features of fast transactions and accessibility that are not in Bitcoin which makes it appealing for crypto investors who continue to follow the patterns of Litecoin Price Prediction and avail themselves of digital profits.