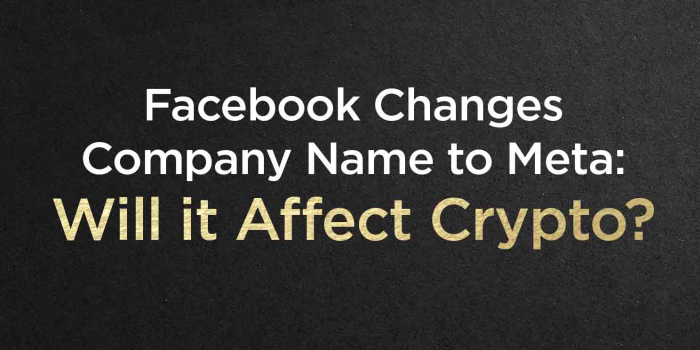 Facebook Changes Company Name to Meta: Will It Affect Crypto?

On Thursday, October 28, 2021, Chief Executive Mark Zuckerberg announced that the Facebook corporation would undergo a new name: Meta. Meta is the umbrella company that oversees its several social media platforms, including Facebook, WhatsApp and Instagram. Zuckerberg plans to elevate the digital age to new heights with Meta as the frontier of information and networking. He foresees the creation of a metaverse within the social media platforms, allowing for a unified hub composed of digital assets for everyone to isolate themselves in. For the people who only know the internet through Facebook and Google, this seems scary. However, for crypto enthusiasts, this could be a dream come true.

What This Means for the Blockchain

“Metaverse” is a term most often used within the crypto space - precisely, those that involve non-fungible tokens or NFT. In layman terms, a metaverse is a decentralised digital world where you can carry out your purchased digital item into other platforms. A decentralised platform is also known as a program without the regulations of government or state. The only governing factor of a decentralised platform is the ones who built it. In the case of Meta, Mark Zuckerberg and his high-ranking executives are in control of its own digital universe.

Cryptocurrency is associated with the metaverse because the metaverse uses the blockchain as its technology. If Zuckerberg plans to use Facebook, WhatsApp, and Instagram to decentralised social media, more people will become aware of how blockchains work. This also means a new business model that other companies may follow suit.

How Does the Metaverse Work

In summary, the Metaverse is a virtual world where you socially interact with everyone and everything. If you watched the movie Ready Player One, you have a broader idea of how it works. Zuckerberg desires to push social media to the next level by putting a virtual universe into our universe, hence metaverse.

When you purchase an item in a specific platform (i.e. buying a weapon in an NFT game), that item is yours to keep - it is your very own digital property with unique characteristics that no other person can find. You can then bring this purchased NFT to another platform as long as it exists within the same “universe” as the previous platform you bought it from. For example, you are buying premium chat stickers on WhatsApp. Usually, you can only use these stickers on WhatsApp alone. But, since Facebook and Instagram exist within the same “universe” as WhatsApp, you can carry out your bought stickers to these other two apps. That’s how it works as a functioning economy.

This is most prevalent in decentralised video games such as My Neighbor Alice, Axie Infinity, and Lost Relics, where in-game items can be purchased and sold with real-world money. You can then bring these items to other games as long as they exist within the same metaverse.

Is the Metaverse Safe?

It may sound like a dystopian future, but for digital entrepreneurs, this is a dream come true. While it is speculated that Facebook did this to turn people’s heads around after the rumours of data mining and questionable community regulations, Meta aims to capitalise on tracked data of individuals into targets for specific commercial niches. Of course, nobody likes an invasion of privacy, but to exist in Zuckerberg’s metaverse is to live knowing that he will use your data to lure in the right brands to target you.

How This Will Affect Cryptocurrency

If Meta meets its goal, it may open a new door for the crypto age. More companies will now use Ethereum as a form of transfer, Bitcoin as the main currency and NFT-based tokens as the machines that empower its metaverse.

Obviously, this much public exposure will skyrocket the crypto economy to new heights, making old investors within the space reach profits beyond their imagination… given that other companies will follow this business model. It will not come as a surprise if Zuckerberg wants to create his cryptocurrency as well.

Over the weekend from October 29 to November 1, 2021, NFT-based tokens made significant gains after the Metaverse announcement, especially with Decentraland (MANA), which went up more than 100% in two days and Sandbox (SAND) that went to the moon with over 60% in gains. Technical analysts say this is just the beginning, and decentralised gaming tokens like Enjin (ENJ) and Chiliz (CHZ) may also follow suit. As Metaverse keeps gaining popularity, the holders of these tokens will find massive profit before 2021 ends or until next year. After all, Metaverse is just starting, and the crypto space is still evolving.

Since Metaverse focuses on decentralised cyberspace and utilising blockchain technology, the social media company will give way to the coin that started the NFT system: Ethereum. As social media evolves, this marks a new era in gaming and the digital marketplace as well. The more companies utilise the NFT technology, the more relevant Ethereum and its forked tokens will become.

That said, Ethereum’s technology may need to improve on its own since the gas fees are still relatively high and the ongoing issues with certain gaming token transactions such as Axie Infinity and Terra Worlds. But, we can be positive about the overall outcome of Ethereum’s future, given that Vitalik will continue to improve ETH as time goes by along with Bitcoin.

A New Frontier for Cryptocurrency

Metaverse may just be the kickstarter that cryptocurrency needed for most of the public to see the market as legitimate. After all, many people are still sceptical about cryptocurrency and its unregulated nature compared to stocks and bank bonds. However, with a new generation of investors, we may see a new light in the world of cryptocurrency - be it Bitcoin currency, Ethereum coin, Dogecoin coin, Cardano coin or Ripple coin. As long as big company moves like Facebook continue to take advantage of the blockchain, there’s nowhere for the market to go but up. Once the other corporations will also use blockchain for their businesses, it will not be a surprise if every cryptocurrency in the market will take flight - be it fundamental or just a meme coin.