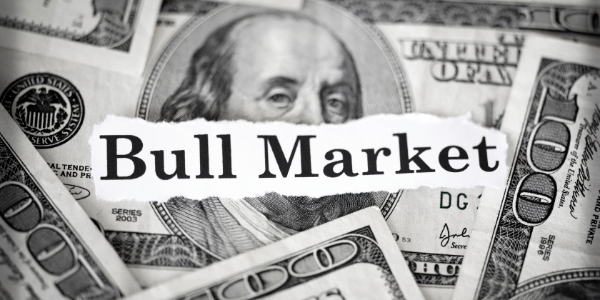 We have previously told you about bull markets, what they are and how they are connected in Bitcoin and its current price.

A bull market is where the supply of a product is going down while the demand is either stagnant or going up. This creates a price increase as more people are wanting to buy, but the supply is not meeting this demand.

Why is this happening?

This is a question that many people ask as it is a foreign concept to them for something digital to have this much buzz around it. There are a few reasons why this is happening such as:

Right now, the big banks of the world control our currency and can see where our money goes and what we spend it on. Some are distrustful at them having this much access to our information.

It is also due to the way banks handle money such as the way they gave out loans to people who could not pay them back in 2007 in the US which caused the recession of 2009.

2. The potential of a recession

Right now, it appears as if the US and the rest of the world will go into some form of recession within the next year after COVID-19 destroyed economies around the world.

3. Wanting a store of value

People want to have an investment that is not tied to an outside source and therefore won't lose value if and when a recession hits.

How do we know we are in a bull market?

Willy Woo, a Twitter user, and cryptocurrency analyst has given out several pieces of information that tell us why the bull market is happening.

They say that on average, miners are selling 11 Bitcoins per hour on exchange sites. By comparison, 214 Bitcoins are being taken off the exchange sites per hour. This is creating a significant imbalance of supply and demand. More people are holding Bitcoins than before.

Bitcoins price is rising rapidly and is currently worth $23,689 AUD at the time of writing. If this bull market continues, we could see the price go even higher.

The situation we are in may look the same as in 2017, but in fact, it is completely different as back then no one was holding onto coins which is one of the reasons the price crashed in early 2018.