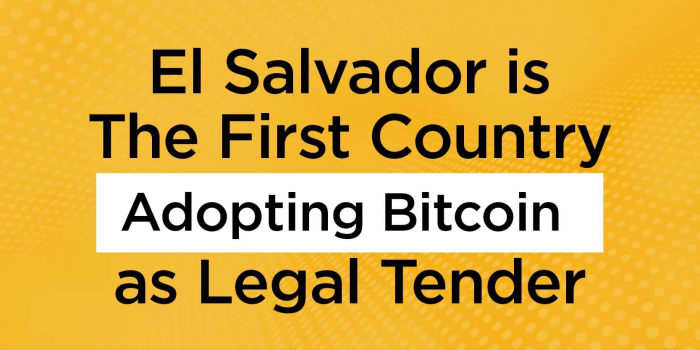 Amid the cryptocurrency boom, digital assets remain semi-underground—trading with the government’s knowledge and under regulations, but not recognized as legal tender. This means that investors receive no authoritative support when they suffer losses or fall victim to scams or hacks.

Due to the highly privatized nature of cryptocurrency and its bold claim to replace fiat equivalents, governments are wary about turning coins into a legitimate medium of exchange. The resistance has a lot to do with the market’s volatility, which is susceptible to price instability and sudden price crashes. It’s unsustainable for a coin to afford an item one day but not the next, hence all the precautions concerning this industry.

The World Bank has previously issued a statement saying it would not recognize Bitcoin as legal tender, and neither do international organizations such as the International Monetary Fund (IMF) or the Organisation for Economic Co-operation and Development (OECD). However, El Salvador is turning the tables with a recent, groundbreaking announcement: the country is now ready to accept Bitcoin currency as legal tender.

At a small corner of Central America, El Salvador has had its fair share of turmoil marred by political unrest and natural disasters. As a result, its economy has been disastrous, forcing the country into 20 years of dollarisation—a band-aid covering the overarching issue of massive public debt.

In 2001, colones, the country’s national currency, suffered massive deflation reminiscent of the unstable crypto market. Prices almost doubled overnight, and within a year, only dollars circulated the economy. Since then, El Salvador has been unable to recover from the financial disaster, relying on remittances to keep the economy barely standing.

Given the country’s shaky position, accepting Bitcoin as legal tender was one of its only options. It will allow El Salvadorians to shift away from their reliance on USD while not risking ownership of the unfavorable colones, which has also become difficult to come by in recent years.

The Impact of Adopting Bitcoin as a Legal Tender

President Nayib Bukele's primary reason for supporting the legalization of full Bitcoin use is financial inclusion, as many of the country's residents are unbanked, complicating the remittance process that keeps the economy alive. El Salvador's dependence on the USD has put it in a situation where it has no control over the money flowing in and out of the economy—and it's now at the constant mercy of the central banks.

The move to legalize Bitcoin as legal tender will come in 90 days, allowing residents to pay taxes with BTC and requiring all economic "agents" with the appropriate technology to accept the coin in transactions. The move is expected to generate jobs and promote financial inclusion to those outside the formal economy. It will also simplify the remittance process, as cross-border transfers are made easy with the help of blockchain technology.

However, not everyone is pleased with the decision, citing that a good majority of El Salvadorians don’t have access to the technology required to participate in using BTC. While crypto legalization is theoretically a good idea for the country, technological literacy remains a wide-scale issue that requires massive investments to solve. Moreover, the current cryptocurrency economy is defined by informal brokers, crypto and especially Bitcoin volatile prices, and a complex transaction process with large fees in-between. Therefore, the transition won’t be as simple as it sounds.

The Salvadoran Finance Minister, Alejandro Zelaya, has requested the World Bank’s help in implementing BTC as legal tender in the country, which will put all related transactions within the scope of the law. The international organization is wary about Bitcoin’s environmental impact—a concern propagated by the Proof-of-Work consensus model involved in the network’s mining process. It cumulatively consumes more energy than entire countries per year, making it a highly unsustainable process.

The World Bank stated that Bitcoin has too many shortcomings, including the lack of transparency, making them reluctant to support El Salvador’s ambitions. However, they reassured their commitment to helping the country in other ways, such as implementing regulatory processes and promoting currency transparency.

Zelaya has also approached the IMF with the same discussions, and while it has been reportedly productive, the Bitcoin legal tender battle is still being seen with criticism on the international front. For now, El Salvador’s debt is increasing, and many institutions question the macroeconomic and financial issues that would surface by allowing BTC to circulate and be used on a wide scale. But for now, the country hasn’t given up—and investors are closely watching how the next 90 days will turn out.