Currency Converter
The Top Coins > Blog > Cryptocurrencies > From Cow to Coin: Inside The World of Renewable Crypto Mining 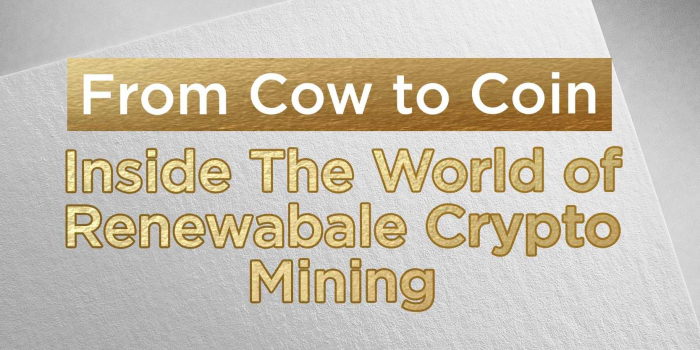 From Cow to Coin: Inside The World of Renewable Crypto Mining

The cryptocurrency sensation has brought on more than just a shortage of graphics cards, government crackdowns, and a meme coin revolution. Following Elon Musk’s concern over Bitcoin mining’s negative effects on the environment, primarily incited by its lavish fossil fuel consumption, the discourse over the Proof-of-Work-fueled ecological disaster finally came to light.

If you haven’t been following the crypto-high, Proof-of-Work (PoW) is essentially a consensus model that popular cryptocurrencies Bitcoin and Ethereum, among others, employ. This model generates new coins in a process called “mining,” which requires computers to race against each other to solve a complex mathematical puzzle. Only the first gets the block reward: an elusive handful of coins. In theory, PoW wasn’t intended to harm the environment. But the increasingly growing cryptocurrency price tag has brought in more miners than the networks need, creating a highly competitive landscape where only the strongest computers can win the race.

And stronger computers mean more power. Studies have shown that Bitcoin mining alone consumes more energy than Ireland and many other small countries. Needless to say, it’s an unsustainable practice that has been criticized for years—yet miners continue to mine in the name of profit and decentralization.

On the bright side, creative individuals have found workarounds that allow them to participate in PoW sustainably. One such effort ingeniously turns cow manure into energy.

In the olden days, mining involved going to mines with pickaxes and other tools in search of precious metals. Farms were certainly never confused for anything but vast expanses of land that raised livestock or vegetables. Nowadays, these words mean different things—especially in the context of cryptocurrency.

It's not every day that you get to see a farm furnished with large domes and tanks—not storing wool or produce, but engines that power a cryptocurrency minefield within the vicinity. Yet, this is the sight that greets visitors upon entering the Philip Hughes farm in Denbighshire. It's usually a farm that flourishes by grazing thousands of cattle and sheep, but they're putting energy into other ventures these days. In particular, they've gotten into the business of turning "cow muck" into renewable energy. And as odd as it sounds, it's reimagining renewable energy like no other—specifically for farms that raise cows.

It all starts with anaerobic digestion, which is a process wherein organic matter in the form of food waste is broken down by bacteria in an oxygen-free environment. The result is biogas—a renewable energy resource that effectively replaces coal and natural gas. In theory, anaerobic digestion can occur in any kind of organic waste, including that of humans’. Landfills are known to be hubs where this process naturally occurs, but to effectively form large amounts of renewable energy, special machines are required to optimize the environment for converting matter to gas.

In the farm, that environment is a large six-cylinder engine that converts the methane component of cow muck to renewable biogas. Methane is a harmful greenhouse gas that disrupts the ozone layer. By keeping it in an enclosed environment, the compound is broken down to form heat and electricity. Utilizing anaerobic digestion is beneficial to farmers—even those that aren’t planning to mine cryptocurrency—because it helps create renewable energy to run the farm. Excess muck can also be repurposed as fertilizer, so it’s a win-win both ways.

While Bitcoin (BTC) currency is often at the center of most mining operations, the Philip Hughes farm has chosen to mine Ethereum (ETH) currency, the most popular altcoin by market cap—and one that utilizes the same energy-consuming Proof-of-Work consensus model. ETH exploded in popularity in mid-April, when non-fungible tokens minted on the network became a worldwide sensation. Before then, ETH was trading at $1,300 amid this year’s bull market. At its peak, the coin was at $4,400, so mining it became a highly profitable venture—especially when electric bills aren’t sky-high. The market has since mellowed down after a massive sell-off provoked by Elon Musk and government regulations, but the coin still trades at $2,100 each.

What makes Ethereum mining energy-consuming is the notorious Proof-of-Work model that requires miners to compete against one another in a race to solve the complex cryptography behind the blockchain protocol. By doing so, a new block of transactions can be created—essentially contributing to the network's operations. Unfortunately, due to the competitive nature of the activity, high-end graphics cards and ASIC mining rigs are used to gain an edge, but at the cost of electricity and, in turn, the environment. Ethereum is currently aiming to solve the issue by transitioning to the Proof-of-Stake, a consensus model that doesn't require a massive amount of energy—but until then, the network remains unfriendly to the environment.

This has caused a spike in renewable energy projects, much like the farm's take on anaerobic digestion. Presently, Philip Hughes rents out renewable energy. Their machines—called digesters—power third-party-owned rigs as well as their own.

A Waste of Renewable Energy

While anaerobic digestion is an innovative way of solving the energy consumption of PoW mining, critics believe that it may be a waste of green energy, which could find better use in other projects. In particular, they cite the speculative nature of cryptocurrency and how it hasn't become an asset that has found global use. In the meantime, investors treat coins as no more than investment assets—digital gold with little to no use in day-to-day transactions.

Countries that struggle with currency instability, such as El Salvador, have started opening up to accepting crypto as legal tender. But for the majority of the world, bigwigs like Bitcoin and Ethereum remain unstable for mass adoption. This limitation has partly to do with their inability to scale up. Both networks can only process a handful of transactions per second, dwarfing in comparison to Visa, which has a capacity of over 65,000 per second. Newer altcoins like Cardano and EOS can certainly match up, but these networks don’t require mining—hence why some believe that there are better uses for renewable energy.

The cryptocurrency gold rush was marked by the Bitcoin-led bull market and a decline in the heavy industry due to the pandemic, causing there to be a surplus of energy. That meant cheap electricity for countries like the US (though the same doesn't apply for many parts of the world, where electricity prices soared in areas that saw a sudden spike in crypto mining activity). As a result, New York's Plattsburgh had to impose temporary mining bans, while China has begun making greater moves in a countrywide wipeout of coin mining activities.

Experts believe that rather than wasting renewable energy on mining operations, blockchains are better off finding ways in creating sustainable decentralized solutions—like what Ethereum is doing by transitioning into the PoS model. Moreover, due to the difficulty of gauging how relevant cryptocurrency will be in the future, corporations are also hesitant in creating solutions specifically for PoW mining operations.

Meanwhile, in the UK, the Philip Hughes farm's approach to anaerobic digestion is sparking an interest among farmers, many of whom have contacted Philip for more details. Of course, if mining operations were to cease, farms can still make use of the biogas to power up regular farming activities, making it a risk-free venture on their end. But for the rest of the world, supporting sustainable cryptocurrencies may be the only way of solving the environmental problem.